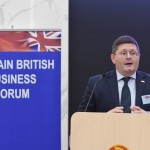 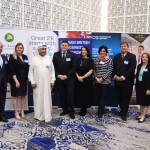 Manama, Bahrain – 27 January 2020: More than 115 Bahrain
British Business Forum (BBBF) members and their guests attended the forum’s January networking lunch meeting held at the Gulf Hotel Convention Centre. H.E. Roddy Drummond, Her Majesty’s Ambassador to Bahrain, was the VIP guest of honour and the keynote speaker. His Excellency was welcomed by the BBBF Chairman, Mr. Khalid Al Zayani OBE, who opened the meeting.

In his first address as guest of honour, H.E. Roddy Drummond discussed the outlook for the year ahead for Bahrain British business. He highlighted the latest international trade developments, and also discussed the environment and prosperity. His Excellency also said that the British Embassy would continue collaborating with Bahraini and British businesses to help foster even closer UK-Bahrain business relationships, especially harnessing the opportunities provided by the upcoming Brexit.

He added: “I would like to take this opportunity to congratulate the BBBF for its 25th anniversary this year. It’s a remarkable milestone and it’s my pleasure to be associated with the forum during this special year. I look forward to continuing to meet its members at the many events the BBBF will hold over the coming months.

On behalf of the BBBF, Mr. Al Zayani OBE, expressed his appreciation to Mr. Drummond as he thanked him for his support to the forum and for British Business in Bahrain.