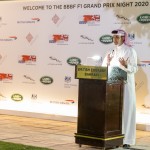 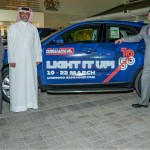 H.E. Roddy Drummond, Her Majesty’s Ambassador to Bahrain, said: “Yasmin and I are delighted to host our first BBBF Bahrain F1 Grand Prix Night event in the picturesque Embassy gardens.  We are pleased to welcome H.E. Shaikh Salman bin Isa Al Khalifa to give details about the exhilarating events at this year’s Bahrain Formula 1 Grand Prix. I would also like to express my appreciation and thanks to the BBBF and Khalid Al Zayani OBE for making this event an annual tradition at the Embassy.”

BBBF Chairman Khalid Al Zayani OBE commented: “We are pleased to welcome tonight’s guest of honour H.E. Shaikh Salman. We all eagerly await to experience another action-packed race at the BIC and we are certain it will be again a terrific success for Bahrain and the team at the circuit. We at the BBBF are very grateful to H.E. Roddy Drummond, his wife Yasmin and the British Embassy team, for their steadfast support of the forum and our activities. I would also like to thank our sponsors for their generosity.”