Home > About > About Bahrain 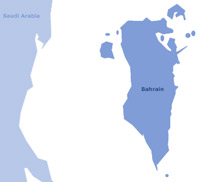 Bahrain, a group of 33 islands, with an area of 707 square kilometres, is situated in the Arabian Gulf, off the east coast of Saudi Arabia. The local time is GMT + 3 hours.The state takes its name from the largest island Bahrain, which is 586.5 square kilometres. It is linked by causeways to Muharraq (international airport) and Sitra (industrial area and tank-farm). There are numerous other tiny islands, but they are mainly uninhabited and are best known for the variety of migrating birds which pass through in spring and autumn.

Arabic is the official language, although English is widely understood and it’s used by most businesses. Islam is the religion of Bahrain and is practised by a large, majority. Places of worship of other faiths exist on the island.

The climate is hot in summer and mild in winter. From November to April is very pleasant, with temperatures from 15 to 24 degrees centigrade. Temperatures are coolest between December and March when northerly winds prevail. From July to September temperatures average 36 degrees centigrade with high humidity. The annual average rainfall is approximately 77 millimetres.

The Arabian Gulf has an average depth of only 35 metres and most of it in the vicinity of Bahrain is much shallower than this.

H.H. The King, Shaikh Hamad Bin Isa Al Khalifa, came to power on the 6th of March 1999, following the path of the late Amir. His Highness the King Shaikh Hamad Bin Isa Al Khalifa has continued in steering the country towards prosperity, glory and success. Evidence of the achievement are found in every sector of the economy and is a source of pride and inspiration. The country is widely respected by the international community for its progressive policies and programmes, thanks to the judicious leadership of His Highness and his wise government, led by His Highness Shaikh Khalifa Bin Sulman Al Khalifa, the Prime Minister and the continuous support of His Highness Shaikh Sulman Bin Hamad Al Khalifa the Crown Prince and Commander-in-Chief of the Bahrain Defence Force.

Apart from providing a stable government, it has been an active policy to encourage foreign investment and support private enterprise Bahrain became a member of the United Nations and the Arab League in 1971. In 1981 it joined its five neighbours – Saudi Arabia, Oman, Kuwait, the United Arab Emirates and Qatar – to form the strategic alliance called the Gulf Co-operation Council (GCC). Bahrain has an independent legal and judicial system with a framework of commercial laws and, on this strength and its well-developed infrastructure, has become an international and GCC arbitration centre.

Bahrain is an archipelago of 33 islands, with a total land area in excess of 700sq.kms.Its name is derived from two Arabic words “thnain Bahr” meaning “two seas” and refers to the phenomenon of sweet water springs under the sea which mingle with the salty water. This phenomenon is believed to be responsible for the unusual luster of Bahrain’s natural pearls, the country’s major economy before the advent of oil. In addition, the land was once blessed with a remarkable number of natural springs, which irrigated the fertile north and western belts for centuries.

The central area is low lying and barren limestone rock covered with saline sand, which supports only hardiest desert vegetation. The highest point of Bahrain is the Jabel Dukhan, 134 meters above the sea level. The majority of Bahrain’s oil wells are in this area.

The country offers a fascinating blend of eastern and western cultures as high rise buildings vie for space with more traditional dwellings and ancient traditions and historical sites mix with modern developments and cosmopolitan living. Bahrain’s population of around 600,000 consists of a significant percentage of expatriates from all over the world. Locals and expatriates live together and interact in a rare bond of fraternity and brotherhood. Such charms, along with an excellent network of hotels, apartments and restaurants, attract an increasing number of regional and international tourists.

Bahrain is rich in history and ancient civilizations have only recently been discovered by international archaeologists. It’s believed that for tens of thousands of years, nomads traveled over Bahrain’s desert and primitive flint tolls found, testify to this history. Recent finds have evidenced that Bahrain was indeed the site of the lost civilization of Dilmun dating from the third millennium BC, often referred to as the fabled Garden of Eden and described as “paradise” in the Epic of Gilgamesh.

The land is repeatedly mentioned in Sumerian , Babylonian and Assyrian inscriptions as an important seaport between Mesopotamia and the Indus Valley, due to the perennial abundance of sweet water. By 600BC, Bahrain was absorbed into the new Babylonian Empire and once again flourished as a prosperous entreaty. In 323BC, two of “Alexander the Great” ships arrived and new trade routes opened, resulting in such a strong Greek influence that Dilmun was renamed Tylos. Bahrain was also the site of the largest prehistoric cemetery in the world. At once stage an estimated 170,000 burial mounds covered the central and western areas. Archaeological finds of those that have been uncovered, reveal evidence of two distinct civilizations the Dilmun and Tylos -two thousand years apart, dating from the third and first millennia, respectively.

During the holy month of Ramadhan, which precedes Eid-Al-Fitra . When Moslems fast during daylight hours business life slows measurably and Moslem employees are allowed shorter working hours than normal.

The Bahraini Dinar is linked with the US dollar at US$ 1= BD 0.375 and is divided into 1000 fils. Notes are available in the following denominations: 500 fils (brown), one dinar (red), five dinars (blue), ten dinars (green), and twenty dinars (peach). Coins come in units of 10,25, 50, and 100 fils. Money can be changed easily at any commercial bank or at one of the money changers found in the Soukh. There are no restrictions on the import and export of currency.